Why are we asked to prove we are not robots?

John Naughton, writing in the Observer (18th November 2018), explains that the acronym CAPTCHA means 'Completely Automated Public Turing test to tell Computers and Humans Apart'. Naughton then argues that the Turing Test* has been reversed: in the original formulation of the test, a machine (more precisely, a computer programme) attempts to convince a human that he/she is communicating with a human, not a machine; now, however, machines ask humans to prove that we are humans, not machines.
*(See the Stanford Encyclopedia of Philosophy for an overview of the Turing Test, or 'Imitation Game'.)

Why are we asked to identify the buses in this image? 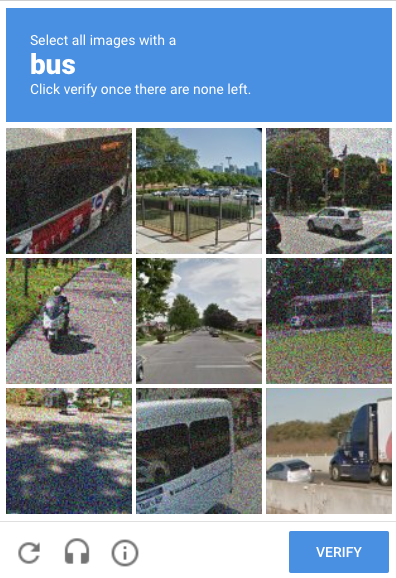 Naughton explains that image-based CAPTCHA asking us to identify street signs, shop fronts, vehicles, pedestrians, bicycles, etc., are being used to train machine-learning algorithms for driverless cars. So we humans are training the machines, and as such we are being used as unpaid labour.